Try using herbs, Pestos and vegetables in Alfredo-like sauces.  They will still be heart attack bombs, but well worth it...ONCE IN A WHILE...
I had to laugh the other day when John came home with groceries.  He said, "well...I didn't get the sausage that was on sale because it was too fattening; but I got some cream and I thought you might make some of that creamy pesto we had in Italy".
Well, I had never heard of a creamy pesto that we had in Italy, but it was not too hard to interpret it.  I am not a big fan of Primavera sauces, but vegetables, herbs etc. are not too bad in an Alfredo.
I thought that it might be nice with grilled veggies or mushrooms and onions(like the mushroom caviar posted elsewhere).
For onions or mushrooms:
Melt half a stick of butter in a saucepan.  Place the mushrooms, mushroom caviar, or just onions into the butter and cook till softening slightly.  Do not cook to a paste.
Add a cup of heavy cream, salt and pepper, and bring the cream to a boil.  Reduce the heat and allow the cream to evaporate slightly.  Then add a big handful of Parmesan cheese, finely grated.  Stir till smooth,  Add a little sage or Nepitella to the sauce.  Thin it out with pasta water or milk if desired and toss with Fettucini( I do not like Fettucini, but any pasta will do.  It would be best to use something broad.  Farfalle comes to mind immediately.).
When using herbs or pesto, start with the butter, add the cream, boil down slightly and add the herbs or pesto along with the Parmesan.
Double or treble the recipe if desired.
Try substituting Gorgonzola for the Parmesan.
Posted by Bill Mitchell at 12:40 PM No comments:

We have already discussed sausage, but I felt I had to include it in the title for the sake of the photos.  Frittatas were not meant to be done by a recipe.  The cook just threw them together after seeing how many eggs were available in the hen house.  I made them the other day for the salad bar by roasting a few small cuts of vegetables and just pouring beaten egg over them to cover and adding Parmesan and pepper.  They were quite thin, perhaps half an inch, and I cut them into fingers for the salad bar crowd.
This is a meal that would traditionally be made by the cook in the family to use up left over veggies and meats in Italy, and there is one famous one(much like the one pictured) that is often seen on Tapas menus in Spain.  So very easy, you really do not need a recipe.
This really is at its best in a big cast iron skillet, but this one was just in a standard skillet.  Of course non stick is more reliable to get out of the pan, unless the cast iron is very well seasoned.
I just steamed a few potatoes (three) cut in 1/2 inch cubes, sauteed a medium onion, and included a few sun dried tomatoes(or red peppers).  Grease or spray a skillet or stove top worthy baking pan.  I put the veggies in the greased pan, season with salt, pepper, sauteed garlic etc., covered them with beaten egg(7) seasoned with salt and pepper and placed them over medium to low heat to cook the bottom.  In this case, I did not want to heat up the kitchen, so I lowered the heat and allowed it to continue cooking, covered, till almost completely set in the middle on the same burner.  Then I placed a layer of cheese on top(Provolone, Swiss, cheddar or Parmesan) and ran it under the broiler with the handle of the pan wrapped in foil.  Traditionally, I would place it in a medium oven to cook till set then do the same with the cheese.
You might do this with pasta, all sorts of veggies and meats left over.  Bacon, Pancetta, sausage chicken, thin steak, meatballs, shrimp, crab, lobster, tuna...(It would be unusual to use cheese with seafood.  However, southern Italians often use Parmesan or Pecorino with seafood all the time, especially since the cheese acts as a salt in the food.)  Just keep the heat low and it will work.
You may wish to lighten the egg mixture with a bit of plain water, or make it very rich and heavy with milk or cream(and or grated cheese) mixed in. 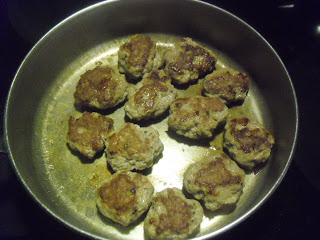 Sausage patties made with ground pork, black pepper, salt and sage...cure overnight or use immediately.  The sausage is not very dark.  It cooks quickly and there is much less fat and salt in it than store bought sausage.   see other posts. 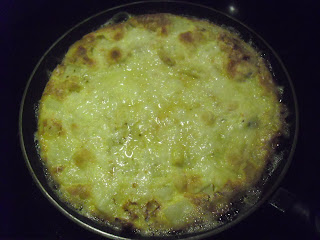 A potato and sun dried tomato Frittata with Provolone(aged). 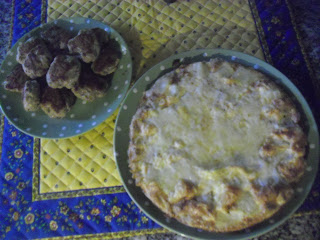 Breakfast ready in half an hour or so.
You can add milk, cream or Half and Half to the egg if you like.  If you feel you must extend the eggs, the result will be lighter with water instead of dairy.  You could easily add yogurt, sour cream, caviar, smoked salmon, home fries or all sorts of exotic ingredients to these.  Remember however, that the temperature will not get terribly high in the eggs, so it is wise to precook to desired doneness before combining ingredients.
Posted by Bill Mitchell at 4:00 AM No comments:

Orloff is a name for a turkey dish that is lost...at least to me...in time.  Layers of turkey cutlets alternate with mushroom and onion caviar as a stuffing.  This inspired me to try this stuffing, or my version of it, as an ingredient in several diverse dishes.  For instance, this could be a stuffing for mushrooms, for small hollowed vegetables, mixed into meatloaf or meatballs, as a layer in a spinach and ham tart with eggs, in Fritattas or in omelets.  Or, it would be nice when mixed into fresh butter or cream cheese as a spread on bread, toast, crackers etc..

This is very simple and really requires no measurements.  All you do is finely mince a pile of mushrooms.  Add in about half the size pile of minced onions and fry them at a low temperature in butter or oil.  Cook and cook and cook till the moisture is nearly gone, then add either Sage, Oregano or Nepitella( a rather hard to find herb, but a classic with mushrooms). and a good splash of sherry, salt and pepper.
Continue to cook till that moisture is reduced, then pack it into a container to cool.
Use as is, or wait till it is cold and mix it, one for one, into the cream cheese or butter.
I would think that this would not be unhappy with a generous dose of minced garlic as well as onion.
Nepitella is sort of a cross between Mint and Oregano, and a combination of the two might be a good substitute.
Posted by Bill Mitchell at 1:01 PM No comments:

Wonderful with a glass of wine, sherry or port.
Spread a bit of this on a piece of Melba toast, toasted bread, crackers, wedges of apples or pears or sturdy vegetables.  Possibly on Endive leaves, a teaspoon in each.

Toast about a cup of walnuts on a dry cookie sheet in a 325 oven, just till they become fragrant.
Chop about a cup of figs into 1/4 inch pieces.  I use baby figs, but you could use any you like.  You might want to soak the very dry figs in sherry or water for an hour or two before using them.  They will suck all the moisture out of the other ingredients if you do not.
chop the walnuts and figs together, till fine, but not a paste.
stir in 1/2 cup of crumbled blue cheese(or to taste).
Moisten with  a nice sherry(sweet or dry)( and optional)
Blend the entire mixture into 1 1/2 cups of softened cream cheese .
Add a little cream if it is terribly thick.
Form into a log by rolling in waxed paper.
Chill for about an hour.
Cut into disks and arrange on a serving platter along with fruit and toast or crackers,. Allowing to come to room temperature.  Spread generous mounds onto the toast etc. to serve.
This is very rich and a small amount is all you need for each serving.

The measurements are approximate.

This would be lovely with hazelnuts, and you might do better with a good Gruyere instead of blue cheese if you can afford the two.  Hazelnuts are through the roof and we all know about Gruyere. You might get away with a really good Swiss instead.  Gruyere is very nutty tasting.   Parmesan is also a bit nutty tasting when just eaten; so that may work too.  Try chunking it up with a spoon or blunt knife instead of grating it. Push the point in and give it a twist.  for this application, keep breaking up the crumbs till they are the size you want.   The cheap stuff will not work well.  The less expensive Parmesan does not have that sweet/salt/nutty flavor.  You can afford to do Parmesan of decent quality, because you need so little to make a big impact.   The texture is completely different, almost granular.
Posted by Bill Mitchell at 4:36 PM No comments: