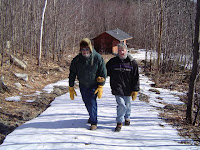 A nice cold day in Maine, perfect for chili...to bad neither Fred nor my sister will eat it.

I have been making chili for years and years. I first had chili at my future mother-in-law's after a skating party at Loring Air Force Base in Maine. Marcia and I went back to her house on the base, which by coincidence was housing that my father helped to build in the early 1950s. My evil mother-in-law was a real piece of work, but one thing you could say for her was that she could cook. Her cooking was definately blander than anything I would make, but she always did things of real quality. I will perhaps put a few of the things that I remember on the site as they have become a part of my regular fare. There was no garlic in her chili. She professed an alergy to garlic. This would not be so much of an issue, but both she and her husband constantly put people in awkward positions because of her problem with it. I will not elaborate, but leave it that going anywhere with either of them was a real adventure, and was usually very embarassing.
You can make chili with any meat you want. Pork, chicken, ground beef, stew meat or cubed chuck or round all work well. You could use expensive meats, but what is the point as you will not taste it at the end and this recipe will make the toughest meat fall apart.
Probably the best choice and closest to traditional(Chili has a very obscure origin, so traditional may be overstating things a bit)would be cubed chuck. I usually use ground beef, simply because I find it convenient and requiring less time to make it edible. Other than making sure the meat is tender, the only real warning is to cook the chili long enough to get the raw taste out of the seasonings. It seems a bit chalky and fresh tasting when you do not let it simmer for a while.

You will do better with all similar long cooking meals like this if you invest in a very heavy dutch oven or a huge cast iron lidded pot. It simmers easily and evenly, and everything just seems to taste better if you have the right pot. I do get along with a pan that comes from a standard set of cookware.

Melt lard, brown 10 rashers of bacon(remove to add later) or use olive oil to get enough fat to cover the bottom of the pot. Each choice has it's own special character and each will produce a very different taste.

Fry one large diced onion on medium heat till lightly browned and soft.
Raise the temperature and add one and a half pounds of your chosen meat. Break up and fry on the highest temperature that you dare in order to leave the meat nicely browned and leave a brown coating on the pan. Add 1/4 cup of Chili powder and stir it into the meat, allowing it to toast and darken. You may wish to add more fat if it is very dry. As the chili powder browns, keep stirring and add one tablespoon of Oregano, one tablespoon of ground Cumin and half a dozen minced garlic cloves. Add a rounded tablespoon of tomato paste and allow that to brown a bit as well. When all has darkened without burning, add one 14 oz can of crushed tomatoes. One small can of chili peppers or chili peppers in adobo sauce or half a cup of freshly chopped chili peppers(choose the peppers that will give you the taste and heat that you want). The large green(Poblano) chili peppers tend to be mild. Add one large chopped green pepper, and a tablespoon of beef bouillion. If you prefer, use a can of beef broth instead. At this point, you may need liquid to cover. Use water if you used bouillon or a bottle of beer. Do not allow this to be too soupy, however you are going to simmer this for a couple of hours, so you do not want it thick enough that is sits on the bottom to burn. I add Worcestershire sauce, a couple of drops of liquid smoke(unnecessary if you used bacon) and half a small jar of Salsa.
Allow this to simmer on top of the stove for at the very least one hour. Add salt and pepper to taste after all the flavors have had a chance to blend. Two hours will be a better cooking time, and if you have used a dutch oven or cast iron, a low oven works wonderfully at 300 degrees.
When nearing completion, add a drained and rinsed can of beans of your choice. I use red kidney beans, but black, pinto or any large variety will work.
I often add a cup or so of frozen corn, just for the color really.
Correct the salt and pepper and heat till the beans and corn are heated through.
If you feel the need to thicken the sauce, make a roux of 2 tablespoons of flour and two tablespoons of butter or oil cooked together two minutes in a separate pan and add to the chili while stirring vigorously. Allow it to cook at least ten minutes after adding the roux.

Coat the beef cubes with flour salt and pepper. Fry the meat till very brown in the fat before anything else has been added. Then move on to the onions and spices. There should be a heavy coating of brown on the pan, and you may have to add more fat as the flour will have absobed much of it.(try using corn FLOUR instead)

Take half of the batch of chili and put it in a cast iron skillet. Pour a layer of your favorite corn bread recipe on top(do not add the sugar)perhaps adding minced chilis, red peppers, grated cheese and kernels of corn to the batter. Bake till a toothpick comes out fairly clean. The layer on top of the chili will be quite moist. You could also put a nice layer of cheese between the chili and the cornbread.

Make baking powder biscuits to go with this, or a pan of cornbread. Either could have minced peppers and cheese in them. Put your choice of starch in the plate and ladle some chili over it. Even rice or pasta will work well.

Those of you who like to roast their corn on the grill, try topping the corn with a smear if pureed chili before wrapping it up in foil. You could also use a puree just to season the corn in place of butter as you serve it.
Posted by Bill Mitchell at 10:20 AM