The Big Bag of Peppers or the Individual Peppers.

It is nice when peppers go on sale.  I buy a ton, and chop them up, put them in plastic zip lock bags or plastic containers, and stick them in the freezer.  Good deal! 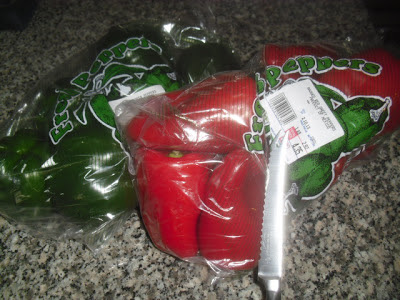 However, and this applies to all produce, you should be wary of the big bags at discount prices outside the bumper crop time period.  You have to remember that THESE BIG CORPORATIONS ARE NOT GOING TO GIVE YOU ANYTHING FOR FREE....
Do not be shy when buying these packages.  Poke a hole in the bag, and take one out. Weigh it in your hand, and do the same with the expensive peppers.
Many times the big bags of peppers are either different varieties of pepper, or harvested at a different stage of development.  Often, those little peppers have much larger seed masses inside.  They may fill the inside, when the expensive pepper seeds are a small proportion of the weight.  Also, the flesh of the pepper may be thinner and less engorged with moisture.
You will have to let trial and error be your guide.  The little peppers may not be as good a value as they seem.  There may be less pepper per pepper so to speak.
The other side of the coin is that though there may be less pepper, what is there, may be more intense in flavor, and more like the garden peppers that you grow at home or you remember as a child.
The Italians are very practical when it comes to food, and they demand very high quality.  As a result food is expensive in Italy.  That does not always stop them from serving you really terrible and overcooked food once in a while.  I once had broccoli with pasta in Rome that I just could not get down after the first half dozen bites.
Of course they use fresh produce as much as possible, and they often use fresh produce to can or jar their produce for later.  Italians have no issues at all with buying canned tomatoes for instance, especially when they are in cans lined with enamel instead of plain metal.  Also, buy puree or crushed tomatoes, instead of diced or similar.  The diced and chunkier textures are often loaded with chemicals to preserve that texture.  Don't buy them!!!!!
If you want chunkier textures, buy tomatoes!!!!  Cut them up and cook with them.
Tomato paste is also a good deal.  They are cooked down to concentrate, or if they are really good, they are evaporated in the sun to make the concentrate.  I have a recipe for Pasta Alla Amatriciana in this site, that makes a sauce for a number of people with nothing but a small can of paste and a quantity of broth or water.  You do not have to do the entire recipe, but you can use the technique to produce a very inexpensive and quick sauce.
DO NOT BUY DENTED CANS OF ACIDIC FOOD, EVER,, UNLESS IT IS A FRESH DENT(HOW DO YOU KNOW) OR YOU PLAN TO USE IT IMMEDIATELY.(STILL CHANCY)
Best of all, is to buy local produce and can the produce for yourself.  It is not hard to do, and you will have a very superior product.  My parents froze their tomatoes in vacuum seal bags.
It is also best to grow your own produce if you can...I realize this is impractical for many people, but at least you can support local agriculture by frequenting local farm stands and farmer's markets.
If you do your own canning, do not throw the skins out.  They are filled with nutrients that you will not get in the rest of the tomato.  This is also true of many vegetables.  Juice them or puree them.   Forcibly strain out the moisture from the seeds as well...use this in soups or return it to your canning.
Posted by Bill Mitchell at 7:54 AM