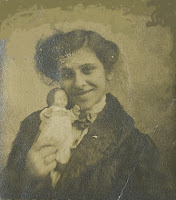 I think that we are all taken with the cooking that we grew up with. Mom made wonderful sauce. Grammie did great chicken and biscotti. Mrs. Burrill did brownies to die for. We can never be convinced that our mothers were not the greatest cooks on earth, and why should we? Grammie was a great cook. She learned at home in Salina, then got a dose of cooking instruction in Naples with her Aunt and then spent a lifetime caring for her large family and everyone that wandered in for a meal or twenty for years and years. She seems to have adapted to her surroundings too. When I went to visit her youngest sister in Livorno, virtually the first thing out of Carolina's mouth was: "Does your grandmother still cook those wonderful baked beans and other things like she used to?" She had a reputation all over for her cooking, but then all the women in the family were good cooks. Along came Uncle Phil, and they competed for the title. My sister was more likely to know her cooking than I was. She spent plenty of time with Grammie at the Johnnie Farm in Littleton, Maine. She said that like her, Grammie threw any compatible thing into her beans. If salt pork was not available, she would use bacon, a ham hock or other meat. If there was no Molasses she would use brown sugar. Apples were used sometimes, and Maple Syrup works of course. I do not suppose any of these things are a great revelation. The big difference that Sis remembers is the final dressing of the beans with olive oil. Who would have guessed?(See the letter from Mary Burrill in the blog at: http://cafarella-cincotta.blogspot.com for more of her memories of Grammie.)

Here is the recipe in her Housewife's Library.

Put the beans in to soak early in the evening, in a dish that will allow plenty of water to be used. Change the water at bed-time. Next morning early, parboil two hours; pour off nearly all the water; take raw pork, scored on top; put the beans in a deep dish, a stoneware jar is very nice, the pork in the middle, sinking it so as to have it just level with the surface. Add half a teaspoon of soda, two tablespoonfuls of molasses, and bake at least six hours. As the beans bake dry, add more water, a little at a time, until the last hour, when it is not necessary to moisten them.
Posted by Bill Mitchell at 9:47 AM