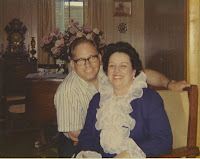 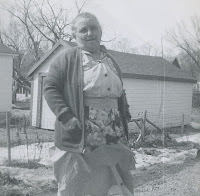 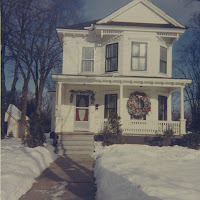 It is now December third. The thought of Christmas cookies and other family treats has become prominent in my mind recently.


I remember living on Pleasant Street in Houlton, in the first few years that we were there. The 19th century kitchen still wore it's bead-board walls and ceiling, some in varnish and some in layer upon layer of paint.


Mom was still active in the family before the MS struck her and reduced her role considerably. She and Grammie sat at the old metal topped table opposite the stove. They rolled out dough and cooked figs to make these filled cookies. You have to understand that they did not co-operate easily in the kitchen together, so perhaps Uncle Phil was there too... acting as a referee. The fact that I was there working on these in a nominal way may have kept them from coming to blows.


I had been grieving over the loss of that recipe, not so much because I liked the cookies...because I did not really like them at the time...but the times making cookies were pretty rare in my memory. I was after all the last child at home, and there were few times when we all got together except for perhaps Christmas day or Thanksgiving day.


A couple of the things I mourn for are the cookie cutters that Uncle Phil made in some factory long ago. There was one that was round with a scalloped edge and another that was made for cutting doughnuts. More things that disappeared in the divorce.


Anyway, these were the cutters they used for these cookies. They would do two circles with the filling in the middle...They tried to line up the scallops on the edge...Or they would put the scalloped circle on the bottom and the doughnut cutout sans hole was put on top of the filling leaving the hole to expose a bit of the fruit as a vent. These look just like round Ravioli.


I do not know if these are something from Grammie's youth...something from her parents(they are too sweet to be typically Italian...Italian sweets tend not to be very sweet at all)...Perhaps something from Littleton where the Campbells were cooking up a storm all the time...Or from the newspaper or a cookbook from the early 20th century when Grammie had her kids. This is another instance where I just didn't ask the questions when I should have.


Anyway, the loss of this recipe has been nagging at me since my mother died...one of many things that have nagged at me.


So, I decided to call around to some of the cousins and my sister to find out what I could about them. Sis was not home, Mildred did not remember them and nobody else was answering the phone.


I started to thumb my way through a couple of old cookbooks that I had here. The covers are gone and the acidic pages are falling into beige confetti. They were Mom's and Grammie's though. Then I came across a blank page for notes in Mom's book. In red pencil was a rather tattered recipe for filled cookies. Eureka, and I had it all the time!


Now, a number of the measurements were faded, some were partially missing and the flour entry said:"Flour to roll". It was not one of those that had the measurements completely up to the guesswork of the cook, but it certainly presented a challenge.


After conferring with Sis a couple of times today, I reconstructed the logic of the recipe, and after going to the store for fresh Cream of Tartar, I gave it a whirl. Well, it came out OK...Just like I remember them...I still don't love them, but I will try some different fillings and I will come up with a version that I will be happy to make every Christmas whether my victims like it or not!


It is a little fiddly to assemble, but the recipe is very easy in general. It would be a fun thing to do as a nostalgic family project.
Posted by Bill Mitchell at 4:00 PM