Grammie Boutelier's Cake as remembered by my stepfather Paul McLaughlin 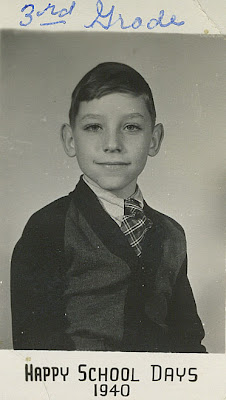 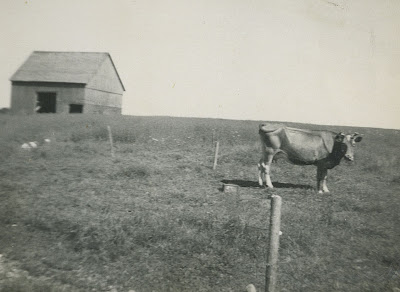 No relation to this story, excpt dairy references. This is Elsie the cow in Littleton. Just being picturesque in an Andrew Wyeth sort of way.


Paul was a mix of Maine cultures. The name Boutelier in his grandparents suggests French. But McLaughlin was on the other side. His research led him to a succession of names that suggested the British Isles. I think he liked the idea of Welsh as his heritage.
Grammie and Grampie Boutelier(Paul's Mother's parents) lived on a dairy farm in Dyer Brook, near Smyrna Mills in North central Maine. You know...near Sherman...Perhaps Houlton would help. Lets just say it was not close to anything.
It was a pleasant 45 minute ride from home, down country lanes that had 60 mile an hour speed limits(I loved that when I got my licence). You passed little towns, lakes and fields with distant views of Glacial Eskers in long ridges covered with pine, spruce and maple forest. It was also along that road that we stopped at a little cottage(A kind word)and got Queenie, who was the first dog I remember. She became my brother Dick's dog really, but I remember her entire life well. It was very idyllic there, and I miss that.
The house was a little "end" temple Greek Revival style house, that was left simple instead of having its nice trim work. It was a strong red with white trim. It would have looked grand despite its size if it had been dressed a bit. There was a little pump in the yard that I was sent out to once or twice for water. I do not remember the occasion, as I think they had running water as well. It was a Dairy farm with rolling pastures in dense green grass. And there was a fish pond back in the fields that I loved to haunt when the visiting did not interest me. Humble people, wonderful people, working people. Very Lucy Maud Montgomery...Lets see if you get THAT reference.

Paul did not say anything much about his childhood, but on one occasion he told me that he especially loved a cake that his grandmother made. She would do a white cake. I guess, like my mother, there were plenty of eggs so you could waste the yolks, or she had some other use for them. Sorry, no recipe. She would do the layers filled with Cranberry preserves(There just happens to be a cranberry jelly recipe here.) made at home.(Probably high bush as there were not any cranberry bogs there.) I think that she may have split the layers to put the filling in, but this is not clear in my memory of what he said. Then she would frost the cake with fresh sweetened whipped cream(Vanilla would be necessary if you had it.) and serve.
You would have to eat this cake almost instantly, especially before the refrigerator came along. I do not think however, that anyone would complain about that. I can just see this with mounds of cream on top and sitting on a pedestal stand surrounded with silver, tea service, cups and saucers and dessert plates.
The country people are not ostentatious, but they knew how to put on a meal and to show the church ladies or birthday boy a beautiful time.
You could, of course, use any preserves you had on hand. I love black cherry reserves. Though I was not particularly fond of cranberry at the time, this somehow captured my imagination. Perhaps it was the way he described it with such nostalgia.
Mom had many times used jelly as a filling in cakes and I had not really taken to it. I have very narrow likes in the preserve world, and she never hit my preferences I guess. Besides, I loved frosting and lots of it. She did the most beautiful cakes. She just had a knack with a palette knife I guess. Swirls and peaks all over. These cake decorators with their thin smooth coatings do not know what they missed.
a good substitute might be Currant jelly. The thing that interested me about this was the possibility of the freshness that a tart fruit would bring to the sweet cake.
See my post for berry filled whipped cream cake.
Posted by Bill Mitchell at 11:03 AM