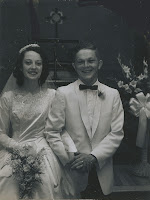 More Chocolate from Alberta...Imagine that. I guess she had a chocolate recipe for every occasion.

Mix together and melt:

Beat in the chocolate mixture.

Pour into a greased and floured pan and bake 30 minutes at 350 degrees F, then 40 minutes at 335 degrees F. Bake till a pick comes out clean.

The concept of a slowing oven.

Back when ovens were a wood fire in a chamber of masonry, you built up the fire till the chamber was very hot, perhaps 450 degrees or more. The fire would be removed from the oven or was raked to the side of the chamber. Once you started baking, it was no longer possible to feed the fire. The chamber began to cool as the fire died or the walls cooled off. You get a nice head start on browning that way, and as it cooled off the baking would continue without burning from the intense heat. They used to start with high temperature baking then move on to bread and later to pastries and cookies. Biscotti would bake at a good temperature then once sliced they would toast at a lower temperature. the last thing in the oven was the old bread, sliced to dry at the very lowest temperature when the regular baking was done. This was the Pani Caliatu. You always see these recipes like in some cakes and in apple pie that use the slowing oven, starting high and lowering later.
Posted by Bill Mitchell at 7:32 AM