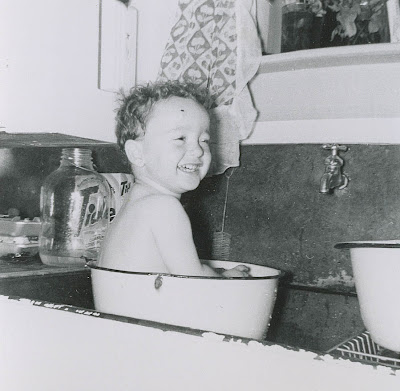 I was fascinated by a recipe I once saw for a Baum Kuchen. This was a cake that was cooked in such a way as to make striations in the cake that looked like you had cut through a piece of wood. Before the time of Internet, there was no way I would be able to find a recipe for that. I was too lazy to go from library cookbook to library cookbook. I did remember the basics of how it was done however, so I simply made it up myself out of stock recipes found here and there and adapted for my own use. I will not publish it here, as it would not be nice to steal some one's recipe. I found a yellow cake recipe in Fanny Farmer, though any yellow cake would certainly do. It would work nicely with a good boxed yellow or gold cake. I also could not remember how it was frosted in the original, so I had to improvise that as well. I had a birthday party coming up for one of my friends in Wiscasset, Maine. I thought that this was a good thing to try as a novelty cake for his birthday.

Traditionally this cake is made of:

One part flour by weight.
One part butter by weight and
Two parts eggs by weight.

If you are up on pastry cookery, you should be able to use this to come up with a respectable batter using common cake methods. Of course you could also look up a recipe on line. I think, however, that it is just as easy to use a white or yellow cake recipe of your choice. This cake would often be coated in melted chocolate among other things because it is common all over the world in different forms. In fact, it is often made by broiling it on a spit!

One problem with recreating this is the near impossibility of coming up with a Brittle(like peanut brittle) with mixed nuts in it. I was trying to make a topping that furthered the idea of "wood". I found a product at a local gourmet store called Rain forest Crunch. It was mixed tropical nuts in a brittle. Great stuff, very expensive, and probably not available anymore. You could make your own brittle, which is pretty simple, or use toffee pieces and a can of unsalted or lightly salted mixed nuts.(No peanuts please) I updated this recipe after a few days with simple brittle recipes. I do not like the idea of using peanut brittle, as a peanut is more of a bean, and the taste is so specifically PEANUT that it spoils the whole idea.

This method will give you a very dense and moist cake, about half the size of the expected two layer cake recipe you will use.

Grease and flour a round cake pan.

Use a large serving spoon to pour a thin layer of batter on the bottom of the pan.

If a lot of dark color is desired, you might sprinkle a layer of sugar on the surface of the batter.

Spread the batter, or if thin enough, tilt the pan to allow it to cover the surface.

Run the pan under a preheated broiler. Watch it carefully and allow it to brown all over.

Remove the pan and spread another thin film over the first. The layers may vary in thickness.

Run it under the broiler again and remove once browned.

Continue till all the batter is used up and the pan is nearly full. This is a little time consuming and tedious if you think about it, but it is a lot of fun to do. This does not have to be perfect. A little uneven makes it look more realistic when you are done.

Check the cake with a toothpick to see if all the layers have cooked through. If not, heat the oven to the temperature recommended for the original cake and bake for a few minutes till it is completely cooked. This should not be necessary if the layers were all thin. (It will be moister than regular baked cake.)

Using about 8 ounces of rain forest crunch, save some of the medium sized pieces for decoration at the end. Use more if you like.

Divide the remainder in half.

Grind one half of the brittle in a food processor to nearly a powder.

Grind the other half into small chunks about the size of a pea to a chick pea.

Beat a pint of heavy whipping cream to stiff peaks with 1/4 cup of sugar and one teaspoon of vanilla.

Fold in the powdered brittle completely. Then fold the chunks into it fairly unevenly, so you see the texture of the lumps in the cream.

Frost the entire cake with the whipped cream mixture, and decorate the top with a little forest of broken brittle pieces.

When you cut through the cake, there will be a pattern in the cake similar to a chunk of wood. The topping will be sweet, but with a pronounced nutty flavor.

Not a Baum Kuchen, but more of a Wood Cake...
This is great fun to do with a kid, telling them what it will look like in advance, and having it come true when they cut into it. Lots of fun.

You could pour melted chocolate over the cake or make a ganache to pour over it(Just chocolate and cream). Another very good glaze is made by beating water into melted chocolate(This is very counter intuitive as water and chocolate are generally enemies). The whipped cream and brittle topping is my own, though toffees are also commonly used in connection with this cake, sometimes mixed into the batter.

Mix two cups of sugar with 1/4 cup of cider vinegar in a saucepan. Bring to a boil. Cook till dark yellow brown and add flavorings as desired, a tablespoon of sugar, a teaspoon of salt and a cup of nuts. Spread on a greased sheet of parchment and allow to cool and break up.

Crocante recipe from a neighbor.

Line a large a cookie sheet with parchment or a silicone mat. Grease the parchment.

In a saucepan over medium-high heat, combine the sugar, water, butter, corn syrup, and salt. Cook, stirring, until the sugar dissolves, then raise the heat to high and boil without stirring. Brush down the sides of the pan with a wet pastry brush as you would in any candy making, until the mixture turns deep golden brown in color and the thermometer reads 350 degrees F. Remove from the heat and stir in the nuts and baking soda if using, with a wooden spoon. It should coat all the nuts. Pour it out onto the pan and, spread it till the nuts are in a single layer. Cool completely. Break it up. Keep the brittle in a sealed container in a cool, dry place for up to 2 weeks.

For use with the wood cake, use a mix of nuts like cashews, almonds, Brazil nuts, Pine nuts...but avoid peanuts for that recipe. strangely enough, you can eat brittles with other things in them. Mix in spices like cumin, Pepperoncini, garlic and things like bacon and crisped Prosciutto.
Posted by Bill Mitchell at 12:39 PM